Sunday Adeyemo left his home on crowded Lagos Island early Wednesday as he always does, only to receive devastating news just hours later: The three-storey building that housed not just his family’s apartment, but a primary and nursery school, had collapsed.

His 7-year-old daughter was inside. She did not survive. At least eight people have died, Nigerian officials said by late Wednesday evening.

“I’m totally devastated,” said a badly shaken Mr Adeyemo, who was on the way to the hospital to collect the body of his daughter, Taiwo, a second-grader.

Scenes of horror and grief surrounded the building that had housed the Ohel Nursery and Primary School on Wednesday, as terrified parents and hundreds of onlookers hoped for the best. At least 70 people were inside the building at 10 am when it fell, and possibly many more, neighbours said.

Rescue efforts continued into the night. Workers had pulled at least 37 people alive from the site, government officials said, tossing aside backpacks and classroom equipment to dig through the rubble. Many were dusty and dazed toddlers who were slung over the shoulders of workers and carried to waiting ambulances. Some were limp.

Fashanu Kudus, who lives in a house overlooking the rescue site, said he had watched the building collapse.

“We just heard ‘wham’ and the three-storey building was reduced to rubble,” he said. 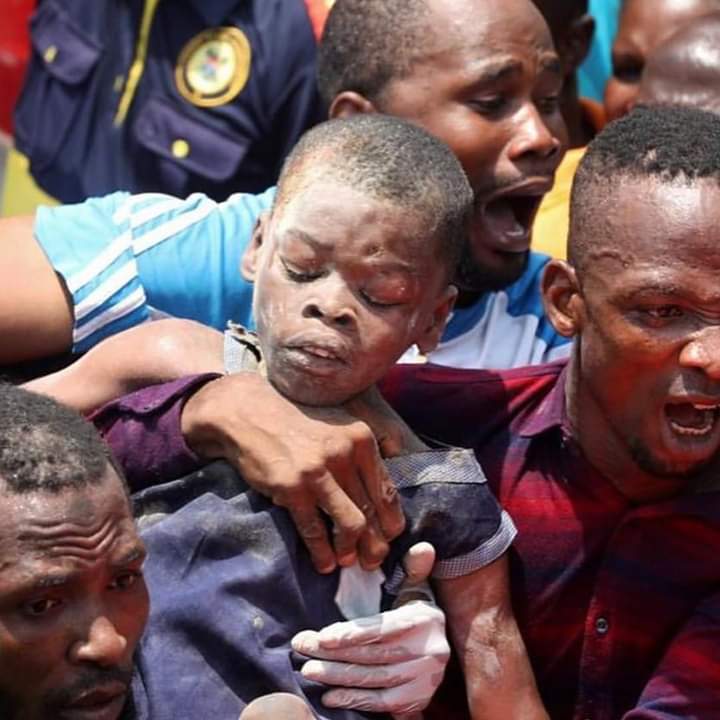 It is a scene that has been repeated through the years in Lagos, Africa’s most populous city and one of the largest in the world, with an estimated 23.4 million people.

Construction here is regulated poorly, if at all, residents have long complained. Some occupied buildings have cracked foundations and tilted floors, creating a sensation of walking on a listing ship. Lagos Island in particular is known for its poor urban planning, narrow access roads and lack of public water supply.

“The developers just do whatever they like,” said Ruka Salami, who lives near the collapsed building.

Akinwunmi Ambode, the governor of Lagos State, said the school had been operating illegally in a residential building, according to a statement. In fact, he added, most of the buildings in the area had been marked for demolition. He called for a “full scale investigation” into the cause of the collapse.

But some residents at the scene blamed government negligence, saying the school building had been marked for demolition with a large ‘X,’ but instead of being demolished, it was recently refurbished. Residents had complained of high rent, and some said they noticed signs of strain on the structure.

On Wednesday morning, it took rescue crews a full hour to arrive at the scene, according to residents, who said they immediately started digging through the debris.

“We started the rescue efforts and had rescued over 20 children alive before the emergency agencies came,” Adegoke Sharafa said.

The construction company Julius Berger sent equipment to help the effort. At one point, one rescuer said he saw 20 children inside and feared the debris would collapse on them before they could be saved. Some workers demanded oxygen masks from an ambulance, but none were available. Onlookers became increasingly angry that rescuers were ill-equipped.

A sea of spectators at the scene cheered and patted the backs of rescuers when they found victims, but created chaos for work crews and security officials. A video that circulated on social media showed a security official blocking one parent from the site.

Dozens of traumatized parents gathered in the compound outside the General Hospital in Lagos Island, close to the collapsed school. Some wept and crumpled to the ground, while others called out for help when the hospital staff had no information.

Dr Titi Goncalvin, an official of the health ministry in Lagos State, said the General Hospital had received 20 patients from the site.

“Today’s a really tragic day for us,” said Dr Goncalvin, speaking to reporters outside the hospital on Wednesday.

One father clung to a lamppost while relatives tried to console him. His 8-year-old son had died, they said.

Nigerians have seen a series of building collapses in recent years. In 2016, a church fell in Uyo and officials at a local hospital put the death toll at 160, though government agencies cited lower figures.

The same year, a five-storey building under construction in the Lekki District of Lagos collapsed, killing at least 34 people. Seven were killed when a private residence fell in Ebute-Meta, a poor neighbourhood, in 2013.

Experts have warned that rising sea levels could cause more problems for Lagos, which is composed of a mainland bordered by the Gulf of Guinea and several islands. Lagos Island, in Lagos Lagoon, is one of them.

Concerns about the safety of development abound.

Construction is underway on Eko Atlantic, a luxury apartment and shopping development. Officials say the development, created by filling in six miles of land, will alleviate crowding and provide jobs. Developers have proposed building a sea wall to shield it from rising sea levels, but at least one scientist has warned that the wall could send surges to nearby areas.

After Wednesday’s building collapse, President Muhammadu Buhari, who was recently re-elected to lead Nigeria, called on the state government “to do all that is needful, so that such tragic developments do not recur.”

His calls were echoed by other aid groups including Plan International Nigeria, which demanded those responsible be punished.

January 22, 2018
0
Pope Francis, in an extremely rare act of self-criticism, apologised to victims of clerical sex abuse on Sunday, acknowledging he had “wounded many” in...