Former US president George H.W. Bush, who presided over the end of the Cold War and routed Saddam Hussein’s Iraqi army but lost a chance for a second term after breaking a no-new-taxes pledge, died on Friday at the age of 94.

Bush, the 41st president of the United States, who lived longer than any of his predecessors and possessed one of the most impressive resumes in American political history, died peacefully at his home in Houston, according to a source close to the family.

His death at 10:10 pm Central time (0410 GMT) was first announced in a brief statement issued by longtime spokesman Jim McGrath, who said funeral arrangements had yet to be scheduled. No further details about the circumstances of his death were immediately available.

He was the father of former President George W. Bush, who served two terms in the White House during the 2000s, and former Florida Governor Jeb Bush, who unsuccessfully sought the 2016 Republican nomination for president.

“The entire Bush family is deeply grateful for 41’s life and love, for the compassion of those who have cared and prayed for Dad, and for the condolences of our friends and fellow citizens,” George W. Bush said in a statement.

The elder Bush, a Republican like his sons, also served as vice president for eight years during Ronald Reagan’s two terms as president, before being elected to the White House himself.

He defeated former Massachusetts Governor Michael Dukakis, the Democratic nominee, in the 1988 presidential campaign, and lost his 1992 re-election bid to Democrat Bill Clinton.

Bush’s death came seven months after that of his wife, former first lady Barbara Bush, to whom he was married for 73 years.

The former president, who served as a U.S. naval aviator during World War Two, had attended his wife’s funeral in Houston in a wheelchair and wore a pair of colorful socks festooned with books, in honor of his late wife’s commitment to literacy.

He had been admitted to a Houston hospital with a blood infection that led to sepsis a day after her funeral in April.

The Bushes had been regular fixtures in their adopted hometown of Houston after his presidency, but public appearances became more rare because of health problems as they reached their 90s.

But Bush was on the field in November 2017 as his eldest son, who served as the nation’s 43rd president, tossed out the first ball at one of the Houston Astros’ World Series games against the Los Angeles Dodgers.

He also had been joined by Barbara for the ceremonial coin toss when Houston hosted the Super Bowl in February 2017.

President Donald Trump paid tribute in a statement to his predecessor’s “essential authenticity, disarming wit, and unwavering commitment to faith, family and country.”

Trump added that Bush “inspired generations of his fellow Americans to public service – to be, in his words, ‘a thousand points of light’ illuminating the greatness, hope and opportunity of America to the world.” 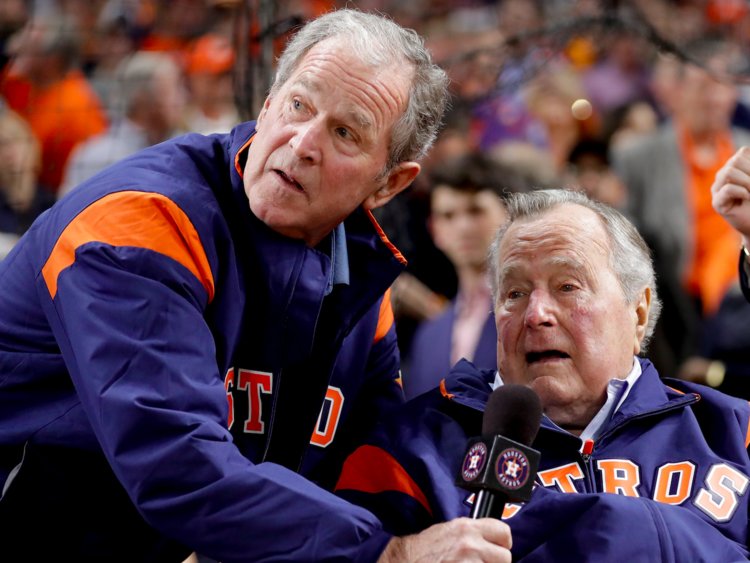 George Herbert Walker Bush, the Connecticut Yankee who came to Texas to be an oilman, died as the patriarch of a Republican political dynasty. His son George Walker Bush was president from 2001 to 2009, making them only the second father and son to hold the office, after John Adams (1797-1801) and John Quincy Adams (1825-1829).

His second son, Jeb, launched his own campaign for the presidency in 2015 before dropping out in February 2016. Bush’s father, Prescott Bush, had been a senator from Connecticut.

Bush had first sought the presidency in 1980, campaigning on experience gathered as a US congressman from Texas, envoy to China, director of the CIA, UN ambassador and chairman of the Republican National Committee.

Ronald Reagan, the former actor and California governor, vanquished him in the Republican primaries but chose Bush as his running mate, hoping Bush’s reputation as a moderate would balance his own hard, conservative image.

After two terms in the Reagan White House, Bush ran for the presidency again in 1988 and defeated Dukakis by winning 40 of the 50 states.

The high points of Bush’s presidency included the end of the Cold War, a decisive victory over Saddam’s Iraqi army in 1991, along with the soaring popularity it won him at home, and progress on Middle East peace.

But Bush’s foreign affairs victories were overshadowed by a stagnant economy at home. He broke his “read my lips” pledge not to raise taxes and lost his 1992 re-election bid to Clinton.

Bush, who was born June 12, 1924, in Milton, Massachusetts, grew up wealthy, attending elite schools but putting off college so he could enlist in the Navy at 18. He flew 58 missions off carriers in World War Two and survived being shot down over the Pacific.

After returning from the war, he married Barbara Pierce, with whom he would have six children. After he graduated from Yale on an accelerated schedule, the Bushes headed to the oil fields of West Texas.

It was there that Bush became involved in politics, first losing a U.S. Senate race in 1964 before winning election to the US House of Representatives in 1966.

After two terms and another failed Senate bid in 1970, he was appointed by President Richard Nixon as US ambassador to the United Nations. In 1974, President Gerald Ford made him an envoy to China and later director of the Central Intelligence Agency.

Bush did not endorse fellow Republican Trump, the eventual winner of the 2016 presidential election, who attacked both Jeb and George W. Bush during his campaign. He did not publicly say whom he voted for in the election, but a source told CNN he went for Trump’s Democratic opponent, Hillary Clinton.

Bush did send Trump a letter in January 2017 saying he would not be able to attend his inauguration because of health concerns, but wishing him the best.

Another man jumps off Third Mainland Bridge in Lagos

September 26, 2017
0
Fistfights and chair-throwing broke out in Uganda’s parliament on Tuesday ahead of a debate on whether to grant long-serving President Yoweri Museveni another term...